Yesterday I restrained myself from going to mall to avoid any dangerous act of wasting money a.k.a shopping. I was so proud of myself cause I have succeeded and went straight home. But sadly, I have failed miserably today. Today I went to watch Batman vs Superman movie with my office’s “movie gang” at Times Square. After the movie, on my way to the car park, I passed by “The Face Shop” store and saw the aloe vera gel stack, and thought – “Ohhh yea, I’ve been wanting to buy ONE”. So I picked that item and on my way to the counter which is only a few steps away, I saw a lip tint, and thought – “Ohhh the price is just nice so I should just grab one”. Then, a few of the Ohhh’s happened and I ended up buying 4 items instead -_-;

This has happened a few times already this year. Which is starting to worry me. I must admit, at times (or many many times), I shouldn’t think too much. This is like a self-reward, right? But if it is, why am I feeling guilty?? Then I tried to google a bit, and found some articles about the type of shoppers;

I was tagged by Zety earlier :D This is a segment from Ucing Kadayan‘s blog, the segment name is mentioned in the title of this post.

Actually, I am really not good in answering riddles though. Kalau loya buruk pandai lah juga sikit-sikit haha. If a friend verbally gave me a riddle, I would usually ask for the answer almost straight away, lol. OK, So here it goes :)

Actually, that’s all I wanted to say. Anything beyond the title doesn’t make much sense, lol. It was a rather another boring weekend for me, and also a bit gloomy too. This evening I made the move to talk to a family member about many things that have been bothering me, so I feel a little bit better now. I feel blessed the person really listened and even offered some help.

I have also finished my very-mini sewing project. It’s nothing special, just a small holder for cards in my pouch. I have problem finding the ‘perfect’ purse for my belongings. What I store are mostly cards *coughgirlscough*, and it can get way too bulky if I choose the wrong purse. So my current solution is – just buy the simple black pouch from H&M, and then make a simple 2-compartments holder for my cards to be placed in the pouch. I use stretchable type of cloth so it will be easier for me to go through my cards :)

I was feeling a little down this evening. As I was seeing some of the people I know went out for Friday night-out. But there I was, just heading home. I partly felt like a fool, but I didn’t know why.

But then some thoughts washed over me. Why must I feel that way?

Yes, they have that ‘luxury’ to have fun like nobody’s business. Then I realized that most of them are living on their own, far from their families.

Me? I have the ‘luxury’ of being around and bermanja my family as much as I can, since I live with them. For example, healthy home cooked meals are always ready whenever I’m home from work. Somehow, it didn’t mean so much to me before, but then I remembered a person told me – how lucky I am. And that is just one example.

What I’m trying to say is that, all of us are blessed with our own ‘luxury’, in our own way. No matter how small it is, we have to be thankful and appreciate what we have.

I guess there are times, for a little while, that I simply forget to see and appreciate what had been in front of my eyes all along. Alhamdulillah, Dia sentiasa buat aku ingat :)

Note: I am fine. I am not writing this entry for ’emo’ purpose or anything. Just as simple as posting my thoughts.

Last month, I made a post about trying the Laneige Water Sleeping Mask, together with it’s facial multi cleanser. Though I have to admit, there are a few times I feel damn lazy and didn’t put it on, but still… I think my face skin condition is getting a bit better than previously.

One of the proof is when I went for a facial last week. To my surprise, the beautician told me that my face has less black-heads. The extraction process wasn’t as long and hurtful as it has always been previously! Sebab from my experience, biasanya rasa macam tepung je muka saya ni, kena lenyek, kena penyek dan macam kena uli masa buat extraction tu, hihi.

Yesterday evening after work, I went to KLCC for a quick stroll and window shopping~ (it’s a usual therapy for women after a longgggg, busy and stressful week, right? :P). As I am already out of moisturizer, I was thinking of trying something new. So I bought this Body Shop’s Drops of Youth cream. Let’s see how it goes after this… hopefully it will go well too ^^

Cheeeesy. Although I have always believe this, but I have to admit that at times, it’s quite hard for me not to feel upset and down whenever bad things happen. After all, saya hanyalah manusia biasa (typical answer :P)

Every experience in our life, was designed to shape us into the ultimate and greater version of ourselves. But we don’t always have that wisdom and enough patience to see this sooner. We mostly focus on the pain and disappointment instead.

“What doesn’t kill you will make you stronger.

I was sitting at Mr Pizza in Hongdae having late lunch, when I captured this photo. Just wondering, what’s your interpretation when you see this photo? :) 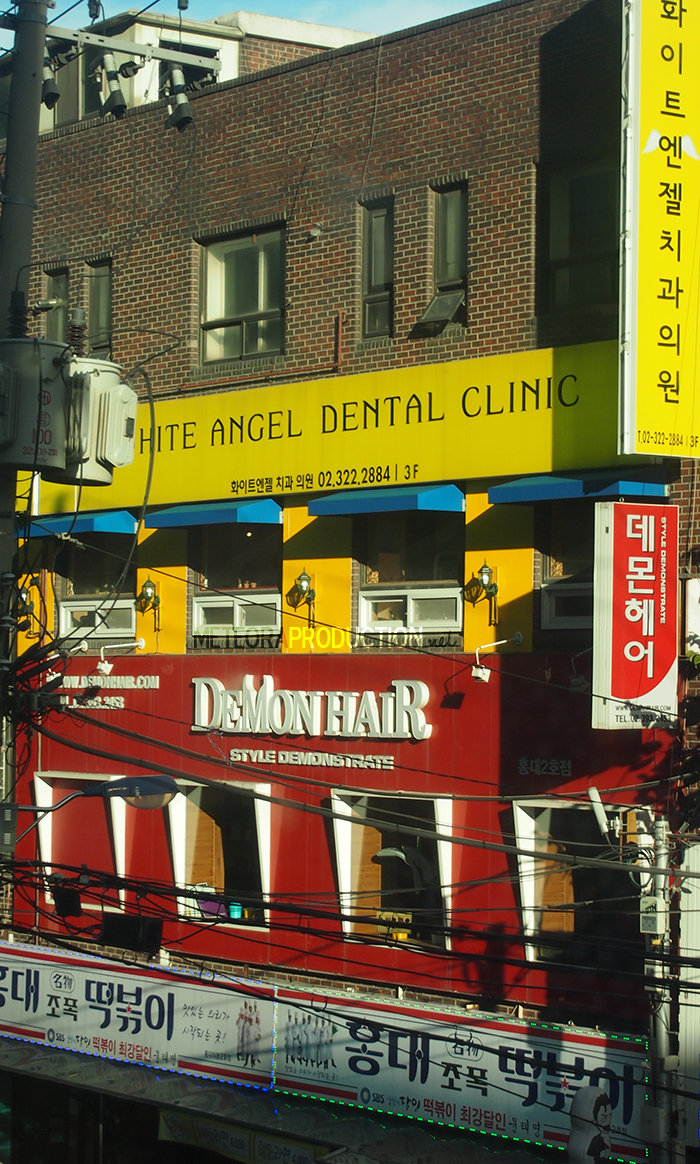 p/s: Oh yesh, this is my debut post for the “Wordless-Wednesday”-ish entries.